Noise bothers people and can cause illness. Researchers are working to dampen the sound directly at the source, for example through perforated walls in engines. Scientists around junior-group leader Dr. Kersten Schmidt from the Berlin research center Matheon and TU Berlin have now developed mathematical models helping to simulate and optimize sound emitters like this considerably faster and with a lower computational effort than before. The engine manufacturers in the region will also benefit from this. 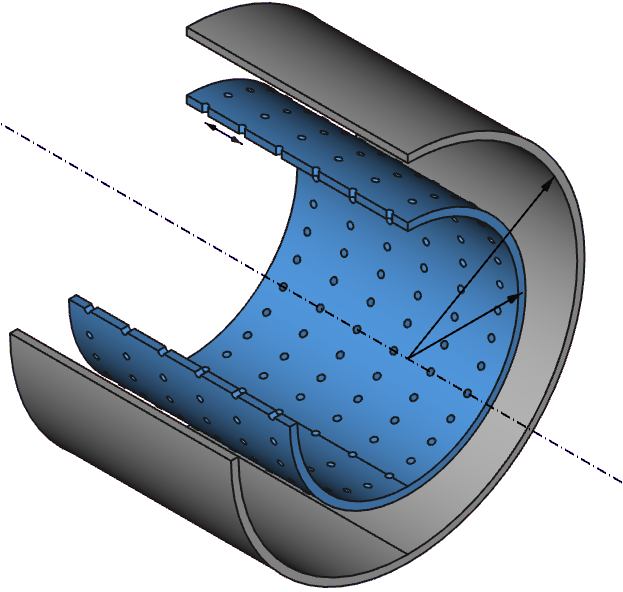 Airplanes thundering a few dozen meters over the rooftops of residences, roaring ship engines that frighten sea creatures, driving cars that create a basic noise level in cities: many means of transport cause noise, which can be both disturbing and morbid. Nevertheless, the residents of the new BER airport in and around Berlin have for some years been pressing for costly noise-protection measures.
Meanwhile, researchers are working on reducing noise at its source. A significant component of that is perforated walls, as can be seen in concert halls or auditoriums. The plates, which are equipped with many small holes, are also used as sound absorbers in aircraft engines, ship propulsion systems and exhaust systems for cars.

Optimize sound damping by simulation
To be able to design such plates more specifically for attenuating sound, a detailed understanding of how they work is essential. Depending on the frequency of the sound, the size and distribution of the holes are of interest. Measurements of these relationships are extremely expensive under real conditions of high heat and pressures in engines or other drives. Therefore, simulations are essential for the optimization of sound insulation. However, the currently used direct numerical treatment, is very complex and barely feasible on computing clusters.

Scientists working with Dr. Kersten Schmidt from the Berlin research center Matheon (Einstein Center for Mathematics Berlin ECMath) have now developed new mathematical models that simplify simulations considerably. Therefore, they can be done substantially faster and with a lower computer effort. In the future, various turbine manufacturers from the Berlin Metropolian region could benefit from the results, such as Siemens Energy, Alstom, MTU, MAN Diesel & Turbo and Rolls-Royce. Initial discussions with business representatives have already been held.

These results were achieved with the postdoctoral fellows Dr. Adrien Semin and Dr. Anastasia Thöns-Zueva in Schmidt’s team as well as international cooperation partners, including Dr. Bérangère Delourme from Université Paris 13 and other partners from mathematical and technical research institutes. For example, engineers for engine acoustics working with Dr.-Ing. Friedrich Bake from the German Aerospace Center (DLR) in Berlin provide measured values from engines.

Lowering the noise level means removing energy from the sound waves
In air, sound propagates as a density fluctuation of the gaseous air molecules like a wave. The wavelength, or its reciprocal value, the frequency, is the measure of the pitch. The amplitude of the wave, i.e. its height, determines volume.

To reduce it, energy must be extracted from the wave. This happens, for example, when sound hits a perforated wall or is passed along it. Two mechanisms are responsible for making it quieter: on the one hand, a thin boundary layer is formed along the wall in which the gas molecules are abruptly decelerated and lose energy. On the other hand, the passing gas particles stimulate vibrations of the air in the holes. This leads to increased friction of the air molecules among each other and on the wall surfaces, with the effect of sound energy being converted into heat.

As a basis for simpler and more efficient simulations of these effects, the mathematicians working with Dr. Kersten Schmidt develop new mathematical models which describe the interaction of the sound with the perforated wall and thus the acoustic properties of the latter. The starting point for this is well-known physical equations from the area of fluid mechanics. An important aspect for the calculations is that the holes and the distance between them are much smaller than the wavelength of the sound.

New mathematical models as the basis for more efficient simulations
With their models, the mathematicians aim to describe the very complex physical contexts as simply as possible without neglecting significant effects. For this, they consider the problem on different scales: first, on a global level as a wall with many holes. Here, they want to abstract from the details of the perforated structure. An essential trick of their approach is to make the number of holes ever larger and the distance between them smaller and smaller. In doing so, they change the diameter and spacing of the holes in such a way that the acoustic properties hardly change. In the borderline case, this describes a wall with infinitely many infinitely small holes.

What may appear particularly complicated for the layman is an advantage in the mathematical treatment because ‘we can describe it more simply and simulate it on the computer’, says Dr. Kersten Schmidt.

The comparison of their results with those from direct numerical simulations of a structure with hundreds of holes showed that they can be satisfied with the quality of their models. Dr. Kersten Schmidt concludes: ‘We have thus shown that our approach of surface homogenization, described here, predicts macroscopically measurable effective properties of perforated walls. In the next step, we will refine the models and consider further physical aspects, for example, that sound usually consists of several frequencies and how the different frequency components influence each other’.

Considering further physical effects to refine the models
Their model, which was rather simple in the first run, is now extended by considering further effects. Dr. Anastasia Thöns-Zueva, for example, has investigated how sound waves of different frequencies interact with one another when they strike the thin boundary layer directly in front of the wall, where they are decelerated abruptly. For this case, she has also developed simplified and easily computable models. Based on this, she now wants to understand the behavior of the sound in the tiny holes of the absorber structures. Since there you also observe a frequency mix meeting boundary layers. These findings will then be of interest to the acoustic engineers at DLR.

Further effects that are important for the technical application of the absorber structures have been made computable by Dr. Adrien Semin: the boundary between a normal and a perforated wall. He could demonstrate both theoretically and with elaborate simulations that his obtained models further improve the description of the acoustic properties. The complexity remains small enough that the problem can be calculated in practice.

The new models are useful for further applications
The results of the Matheon mathematicians and their colleagues help not only to reduce the noise of engines. As quite similar phenomena also occur in the combustion chambers of engines, perforated walls can help to control instabilities in the combustion process to avoid mechanical damage. This extends the machine’s life time.

The new approaches presented here, are not only useful in acoustics. They can also be applied to other applications, such as optical wave propagation or the conduction of electrical current. This is because measurable properties such as the electrical resistance are also influenced by phenomena on very small scales, for example by effects at the interfaces of the conductors (skin effect).