June 27: Matheon at the school festival in Köpenick

Around 500 pupils of the 4th grade have been participating in this year’s project "Wir rechnen miteinander" (“We calculate together”) from the supervisory school authority of the district Treptow-Köpenick. As a reward, they are invited to the FEZ on June 27 for a combined mathematical athletic ending of the competition. They can experience in 30 different workshops, that mathematics is fun and also healthy. Matheon has been supporting the supervisory school authority for years. The highlight of the festival is a common mathematical course of all children in the MATHEATHLON style. The festival starts on June 27 at 9.00 am at the FEZ in Köpenick. 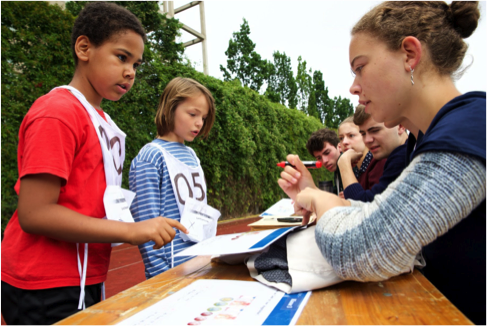 In the procect „Wir rechnen miteinander“ primary-school pupils from Treptow-Köpenick were developing maths problems together with their teachers and sent them to other pupils from neighbouring schools. Thus, the children not only encountered mathematics in a very hands-on way, they also had the chance to meet the pupils from the neighbourhood.

The innovative concept of MATHEATHLON was invented by the Research Center Matheon in 2009 on the occasion of the Athletics World Championships that took place in Berlin. Under the motto „Athletics and Arithmetics“ the competition combines sports and mathematics in a unique way. The pupils have to run a distance of 400 or 800 metres. There are three stops inbetween where they have to solve little maths problems. Each correct answer is rewarded with a two seconds credit. Those, who managed to solve all three tasks, gain two more seconds. In this way, arithmetic specialists can even overtake good runners.

Since 2009, the competition takes place in Berlin once a year. In addition, Matheon sends the tasks to interested parties all over the world. Thus, each school and each club has the opportunity to perform a MATHEATHLON on site. Every year, about twenty schools and associations make use of this offer, including schools from abroad - last year, for example, the German School in Nairobi (Kenya).